Culture (‘Kalja’) provides the foundation for sustainable social and economic development in Vanuatu. A key aim of gathering cultural statistics in the Pacific Living Conditions survey in Vanuatu is to assist policy makers in gauging
levels of economic dependency for improved poverty analysis. There is a positive correlation in Vanuatu between subjective reports of wellbeing and free access to land and natural resources (customary usage rights). This access, coupled with traditional skills enabling productive use of natural resources, provides a unique indicator of poverty risk that policy makers can use to balance information coming from cash and traditional economies. That is, people who have little economic opportunity in the cash economy can be considered as lower risk in a poverty analysis if they have both access to traditional land and natural resources and the skills to make productive use of those assets.

This survey module was developed as an optional add-on to standard household surveys, to enable countries to compile cultural statistics that would provide valuable information on aspects of cultural practice, as well as contextual information for informed social and economic policy analysis. This information is particularly pertinent in societies that embrace their culture and traditions as a valuable heritage.

referring to any one of the estimated 110 distinct indigenous languages spoken throughout the archipelago, is the primary mechanism for transmitting cultural knowledge from one generation to the next. Measures of indigenous language use form a predictive indicator of traditional knowledge trends – if the ability to speak and frequency of speaking in one’s indigenous language decreases, a decrease in traditional knowledge is likely among the next generation. Previous survey work in Vanuatu has chosen to emphasise literacy rates and the ability to speak in the three official national languages of English, French, and Bislama, with little or no information available about indigenous language use and competence. The vast majority of Ni-Vanuatu are multilingual when indigenous languages are factored in. Nearly half (49%) of the population speak at least four languages. A higher proportion (63%) of the urban population is able to speak at least four languages, due largely to the greater degree of linguistic diversity in urbancentres (Chart 1). 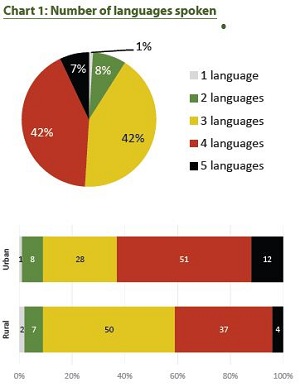